Alex Thebez speaks to Robert Hickerson at his exhibition, “Debasement” at AMO Studios

How did you get into the business of making art?

When I was a junior in high school I decided I wanted to go to art school. I had been making films since I was 7 or 8, and was really invested in going to film school. I made films constantly, but found it frustrating to have to rely on so many people to make a film. Casting my friends as actors seemed like a great idea, until it came time to plan shoots. I also had a problem with story lines. I was so focused on how I wanted it to look that the story often came second. So in my junior year I decided I wanted to be a painter. I had never taken an art class, so I waived into AP studio art – and made paintings based on 1920s pornography. While my work got banned from my high school, it scored the highest on AP. So I enrolled at Parsons, wanting a traditional arts education, but felt empty without film. So I spent the last few years trying to incorporate film into my practice.

A few influences to your work?

I really love The Cremaster Cycle by Matthew Barney. The films themselves are incredible, but what amazed me is how Barney literally created a world to house his films – sculptures, photographs and installations to serve as a vitrine for his Cycle. I also love Maurizio Cattelan & Pierpaolo Ferrari’s Toilet Paper. And can’t forget Tom Wesselmann, he paints the BEST nipples.

Which Pokemon is your favorite?

Eevee, no doubt. It can evolve to just about one million other Pokemon. 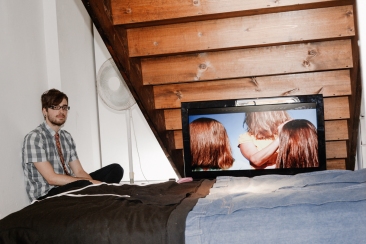 Why such bright poppy aesthetic for such serious subject matter?

One thing that is really important to me, when making an installation or video, is to immediately capture the audience’s attention. Even if they understand nothing else about the work, at least the visuals will stick in their mind. I also really love absurdity, and what better way to make something absurd than to highlight it with bright pink spray paint? Then people pay attention, even if the subject matter is hard to swallow.

Tell us a little bit about the concept behind “Debasement” and how it relates to your previous work.

I started, in early 2012, with a series of work that was about difficulties I was having with a relationship I am in. I was using spandex to materialize the relationship into a series of restraints, or harnesses. I conceptualized a piece, but when it came time to execute it, I couldn’t find anyone to inhabit it. Then it dawned on me – I should use my parents. I mostly did this because I knew they would do it, because they wanted to support me. But once the spandex was on, and the cameras were rolling I realized that the piece was no longer about me, it was about my parents. They had divorced a number of years ago and hadn’t gotten together since, aside from short meetings to talk about my sister or me. There was something interesting in how they sat next to each other, and it made me think about when they were together, and what it was like when they separated. I had moved down to our unfinished basement, in an act of teenage rebellion, when they divorced. I felt really alone, and being in the basement didn’t help. I wanted to recreate it for myself as a sort of catharsis, but in doing so – and in collaborating with both of my parents to make the show happen – we came together as a family.

A little bit about yourself, and coming to New York.

I’m an aquarius. I like movies and music. Purple is my favorite color.

I grew up in the woods in Connecticut. I moved around a bunch, but always ended up in the woods somewhere. I always knew that New York was the place to be if you wanted to do art. Here or London.

So I came here.

Is your upcoming work going to explore similar themes and aesthetics?

To a degree. I am going to continue to make domestic settings, but these are no longer going to be interpretations of real places. Instead I will be making a house, and becoming a house at the same time. I still believe in making it visually interesting, but I feel a lot about it will be darker. But it’s so in my head right now, I know it will inevitably change once it has left.

How is your upcoming work will be different from work that you’ve done up to now?

I have been focusing on the people around me, and how I relate to them, or how they relate to each other.

EAST COAST. I am not an aspiring actor.

What would you be if you were not an artist?

How do you feel about maintaining a day job while making art?

It’s kind of like being a super hero, when your super power is not having money. It’s a double life, only you don’t need a phone booth to become your counterpart. And people always think you’re weird. But weird is good.

One thought on “Interview: Robert Hickerson”