It is an overwhelming task to try and review or even summarize Matthew Barney’s latest film, River of Fundament. This is mainly due to two factors: the overwhelming material within the film, as well as the way in which it is presented. The film is comprised of three parts, each incorporating one of three “live performances”. The overarching story, tying the performances together, is a loose interpretation of Norman Mailer’s Ancient Evenings (which itself is loosely based on Egyptian Mythology). Barney uses Mailer’s writing to weave a loose narrative in which Norman Mailer attempts to reincarnate himself three times, during his own wake held in his apartment, all while a battle for power is happening between Pharaos. The film is marketed as an avant-garde opera, but is presented as cinema in which viewers sit in a theater watching the 6 hour film.

The futility of further trying to summarize the film comes from its waffling between types of time. Where Barney’s past films operate in a very specific manner, River of Fundament uses a confusing mixture of cinematic time and actual time. Past films, such as The Cremaster Cycle and Drawing Restraint 9 mainly operate in actual time, where performers are filmed committing actions fully. The footage is then edited into a cinematic form. Those performing the actions are metaphorical figures; their actions take precedence over their human qualities to advance the story. It is not how the person acts, but rather the action that they do.

River of Fundament is the first time that Barney shows humanity in the figures he constructs. This is an interesting change from the previous films, but results in a noticeable inconsistency in the characters presented. This is most apparent within his long time collaborator Aimee Mullins. Mullins acts as the Ka of Norman, an otherworldly figure who oversees Norman’s attempts at reincarnation. She is enchanting, and really at her best, as she moves ever closer to those who participate within the wake – which is conceived as a dinner party that becomes more and more debauched. However, as the Ka, she is acting within cinematic time. She crosses over into real time during the second act in which Norman becomes reincarnated as a gold 1979 Pontiac Firebird Trans Am. This reincarnation is the performance KHU (2010), in which the Trans Am is brought from the Detroit River onto a ship and then subjected to a crime scene investigation, headed by Mullins. Because this really happened (and wasn’t performed solely for the camera), Mullins’ performance is understandably faulted by having to stay in character amidst exhausting circumstances. Her performance is subpar compared to her as the Ka within the rest of the film. The associated press release claims that this performance acts as a flashback within the film, which seems like a cheap way to forgive this inconsistency.

Characters rendered only within cinematic time have more agency in regards to their ability to be fully rounded. Stephen Payne, who plays Usermare – an all powerful god who determines both who has power and the possibility of reincarnation – is fully frightening and believable. He is also one of the only characters to stay within cinematic time, so his character has the benefits of cinematic construction. However it is not only this that brings his character to life, it is also Payne’s ability to perform within that character. The character of Hasfertiti, while rendered in only cinematic time, fell short due to the performances. Hasfertiti starts as a girl, attending the wake, who is obviously in love with Norman. Played by Madyn G. Coakley, she is innocent and a welcome breather from the otherwise older cast. Her love for Norman’s first reincarnation (played by John Buffalo Mailer) is endearing, so when she says that she will be the vessel to carry Norman’s last reincarnation we can see where she is coming from. However, the qualities of the young Hasfertiti are lost among her older self, played by Maggie Gyllenhaal. Gyllenhaal cannot provide the needed emotional resonance to carry her characters rebellion against Usermare when he claims that Norman won’t be able to reincarnate as her child. While this performance may be forgivable within a more traditionally paced film, it really damages the character when drawn out for 2 hours.

There is also something to be noted about the characters who do serve simply as metaphors. Appearing both in cinematic and actual instances, these characters range in ethnicity. However their inclusion seems to be for their ethnic culture. The first act, centered around the performance REN (2008), has Mexican workers dragging the 1967 Chrysler Imperial from Cremaster 3 through a funeral procession while Lila Downs, a Mexican singer-songwriter, belts out an aria. The third act centered around BA (2013) features dueling ensembles of Native American bands, dressed in brightly colored traditional garb. The third act also features a step team of young African American girls who perform in Norman’s apartment. The vastness of cultural inclusion seems arbitrary, and little more than cultural appropriation, when considering this is a contemporary take on Egyptian Mythology.

The use of cinematic time is new for Barney, and how he deals with it makes him seem like a novice. This is particularly evident within the script. In the beginning of the film, as people arrive to Norman’s wake, their small talk seems real. They are real people whose conversations are relatable, and so when certain foreshadowing occurs it is acceptable, and even appreciated. A particularly interesting instance is when a group of three older men discuss an abstract painting found in Norman’s home. One of the men claims the painting is actually a Trans Am and that he doesn’t like it, another responds that actually it is a painting and a work of art so there is no point in saying that you dislike it when you can just walk away from it. As the party devolves, the guests begin to talk in literary quotes and operatic nonsense. Given the slow pacing of the film, this becomes unbearable and incomprehensible as their descent into insanity is motivated solely by the live performances which occur as flashbacks, instead of well written cinematic devices. 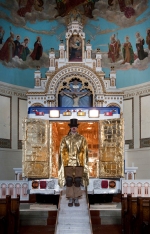 There is no short of metaphoric imagery within River of Fundament. Some of it is stunningly beautiful, other instances are gut wrenching. Similar to attempting to summarize the film, trying to review every metaphor is pointless. It should be said that the inconsistency between actual and cinematic time similarly hinders some of these metaphors. An example would be the main course at Norman’s wake, which is a roasted pig. After the guests have their fill, the pig is left to rot on the dinner table. This type of metaphoric image is one which would be potent in a live situation, however the scenes in which it is featured are again rendered in cinematic time. In theory the rotting of the pig does align itself with the descent of the guests into madness, but in the film it does little more than make an already disjointed film even more disjointed. However there are instances where Barney seems to exhibit the care needed to create a cinematic metaphor. Throughout the film the undead appear within Norman’s apartment, at first unseen by the guests. These figures (including Barney and Mullins) are marked by a line of shit across their chests, as they had to wade through a river of feces in order to enter the realm of the living. This visual device became a marker which was not only interesting, but eventually fun to notice. While the majority of the undead (including the gods) were completely covered in shit, some were hardly dirty at all – except for that line of dried feces.

There is a large amount of explicit scenes, mostly serving metaphoric purposes, throughout the film. The majority of them happen within the third act, and some of them are so foul and so ridiculous that it is hard to not make them the focus of any conversation surrounding River of Fundament. Before delving into specifics, it is important to recognize where Barney comes from. The majority of his other work mixes mythology and bodily function. The entire Cremaster Cycle centered around the cremaster muscle, which controls the testicles, raising them into the body when cold or in danger (as well as to ejaculate). The Cremaster Cycle used the function of this muscle as a way of discussing the violence inherent to masculinity (and the repercussions from enacting that violence). The River of Fundament can be seen in a similar vein. The whole film revolves around the mythology that the dead must cross a river of feces in order to cross from the land of the dead into the land of the living. Norman, in his attempts to reincarnate himself, must cross this river three times. While bodily function seems like a place from which Barney would work, he turns his focus onto the excrement itself.

Shit is seen as a valuable essential, closely related to power. Paul Giamatti, as the reigning Pharoh Phat-Nem-Hotep, relates a story to the first incarnation of Norman about how he created a system in which he can harvest his own feces in order to water his plants, giving life through the use of shit. Barney is focusing on the result of defecating, and not the action. So certain scenes, like where a two party guests leave to have anal sex resulting in the woman having a long bout of mud-like diarrhea, seem without purpose. It’s also hard to tell if Barney has a handle on humour. Within the first two acts the relationship between feces and power is without question, and the characters’ actions are shown as vitally important not matter how ridiculous their actions are. However in the third act he begins to show humours situations, although none of them show feces in a humorous light. One particular instance is where two pregnant women begin to have sex in an auto garage manager’s office. Outside of the office two men are fighting violently. One of the women removes her glass eye and sticks it into the anus of the other woman. Meanwhile one of the men rips out the other man’s eyes in the brawl. The pregnant woman, laying on a desk with a glass eye in her anus, spins to remove sticky notes off of the window looking out onto the brawl so the two separate eyes can look at each other. This seems like a not-so-subtle nod to George Bataille’s Story of the Eye, a ridiculously perverse pornographic novel written by a well known art critic in the 1920’s. This is Barney’s humour.

Barney’s work has always dealt with the mythological, not just in content, but also in construction. It may have been really hard to watch 6 hours of a film in a movie theater, but the chances of seeing the film again are slim. Barney has staged every part of this similarly. For KHU he only invited the art world elite and the press to view the performance in 2010. This allowed the performance to disseminate through different veins of media and become a fable of what happened instead of just images or video. Similarly River of Fundament will live on through it’s retelling, but for the wrong reasons. The explicit scenes will be what people remember and comment on, and in the future they may be what the movie is sought out for. There is interesting content within the film, but it is hard to extract. One truly has to study to begin to unravel the tale. Reading various texts including Mailer, Egyptian mythology, and the emergence of the Auto Industry would merely be a start. Barney wants the audience to work hard for it, but with the way it is presented it doesn’t seem worth it.

Robert Hickerson is a Brooklyn based artist, who works with video, photography and performance. He is also a frequent contributor to Lintroller.